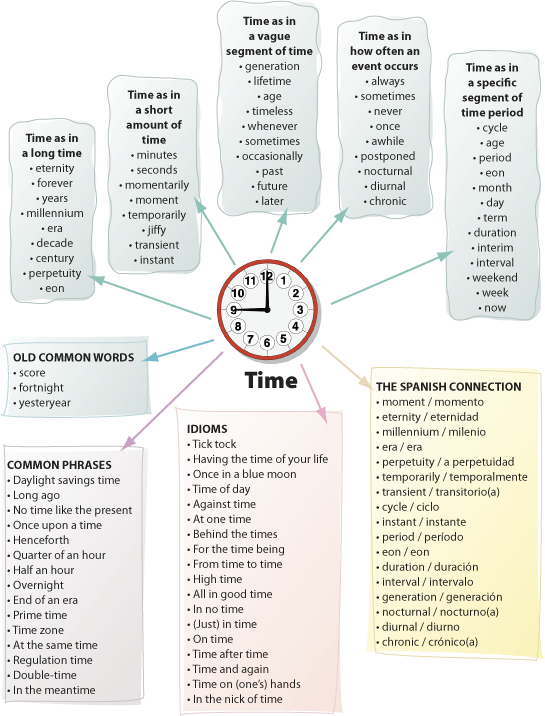 No time is better than the present to discuss time! Time is so essential, it can be a bit of a struggle even to define time without using the word itself. Think about the passage of time and ways people try to understand and measure time, or consider terms such as timeline, timeout, lifetime, or even the “the time of my life.” The word time, the ideas it expresses, and the concepts it provokes are rich to explore.

Time can serve as a verb or a noun, and with the addition of -ly it becomes (perhaps surprisingly) an adjective, timely. The noun usage of time is the most common. Daily events often require people to know what time it is at the moment, how much time they need to finish a task, at what time they need to arrive for an appointment. Many words exist to help organize and make sense of time, such as minute, day, week, month, year, and century. Less specific time words include terms like forever and generations. (Displaying such time terms on a word line could be especially useful.)

The verb to time is to measure how long something takes to occur, or to schedule. In PE, students might be timed to see how quickly they can run a lap. A rocket or shuttle launch is timed to make sure important steps occur in order.

Time comes from an Old English word, tima. The Spanish word for time is el tiempo. Time and el tiempo are not cognates, but some of the synonyms for time do have Spanish cognates. Most of the technical or content specific words used to describe time come from the Greek word khronos. Words such as synchronous are derived from khronos. A chronometer is a device that measures time, a type of watch. 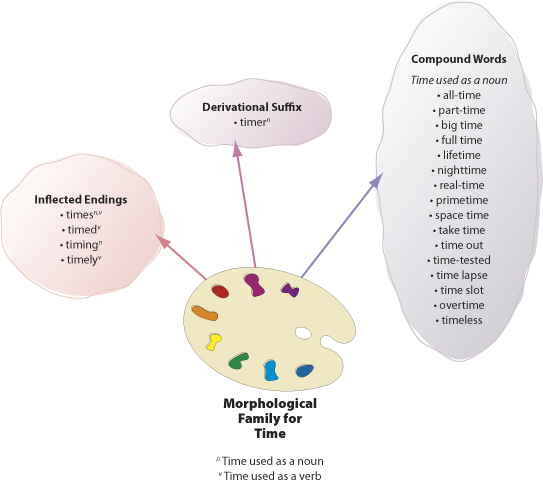