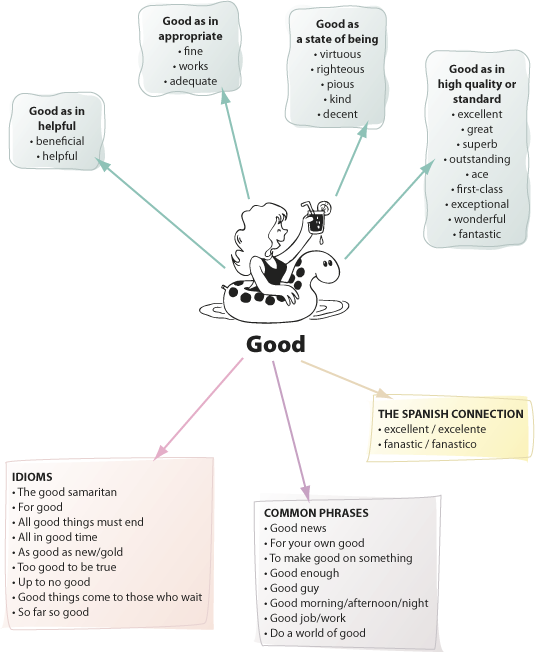 Good is quite hardworking and functional, as words go, serving in many situations as an adjective or a noun, as well as in a goodly number of phrases. Good can describe something that is high in quality or of an elevated standard. A well-written paper or an insightful answer from a student would be considered good. The word good can refer to a person’s character or behavior. A person who volunteers to help others, or who is honest, dependable, and trustworthy would be considered of good character.

Good is employed in evaluative statements that distinguish the relative quality of one thing compared with another. It is one of the set of comparative terms good, better, best. In addition, many synonyms exist for good that help express degrees of this quality, making good an excellent candidate for a word line exercise.

The noun good is defined as a moral quality, such as good versus evil, or as something beneficial, such as the common good. In its plural form, goods, the noun can also refer to items of merchandise, as in: “The U.S. imports goods from around the world.”

Depending on its context, the word good may mean that something is merely adequate. If a student turns in a paper late the teacher might say, “Good.” Most likely, however, his meaning is that the situation is acceptable but not ideal. When a friend’s mother serves you food you really don’t enjoy, you may say it is good to be polite but you are thinking, “This isn’t so great.”

The word good comes from the Old English word god, with ties to the Dutch goed and German gut. It is believed that god is related to a word that means “fitting” or “suitable.” The Spanish word for good is not a cognate. However some of the synonyms for good have Spanish cognates, such as excellent and excelente.