There is a long history of educators recognizing how text complexity affects the success of beginning and struggling readers, as well as of devising systematic methods for evaluating and controlling text complexity. These have had varying levels of basis in or validation by research.

Dr. Elfrieda Hiebert’s Text Elements by Task (TExT) model advances the state of the art by focusing on the multiple tasks involved in successful reading, including:

Research shows that beginning and struggling readers benefit when the number of unfamiliar words in a text is kept low enough to permit the tasks of meaning and comprehension to occur. When readers are overwhelmed by the task of decoding too many new words, their cognitive capability to also extract meaning is diminished and their overall proficiency suffers.

Left Degree to which phonetically-regular words (shown in red) appear

Right Degree to which high-frequency words (shown in purple) appear 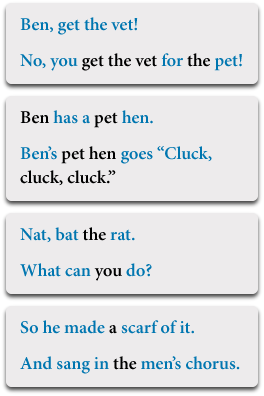 Rate of introducing new words (shown in blue), and repetition of new words. TExT accounts for new words across a series of passages.

For linguistic content, the TExT model calculates the percentage of words in a text that conform to a specific curriculum, which is expressed as a combination of:

The curriculum used for the analysis is adjustable to each reading level, so the same text will score a different level of difficulty when analyzed against a different curriculum.

The TExT Model in QuickReads

In addition to its use in analyzing existing texts, the TExT model may be used to help create texts and entire reading programs such as QuickReads® . In constructing the QuickReads program, a curriculum was established for each of six levels based on an analysis of texts promoted as standards and those used in standardized tests at those levels (see table). Texts in the QuickReads program are designed so that 98% of words are within the curriculum for that level. New words are repeated several times through the course of a QuickReads topic.

The TExT model is augmented in the QuickReads program to help promote fluency and to provide interesting and important content to allow readers practice in reading for comprehension.

To promote the objective of enhancing fluency, the length of QuickReads texts are controlled to help readers become more efficient over time. Each QuickReads passage is designed to be read with meaning in about one minute. The length of the passages increases within each level, and across levels, with the ultimate objective of meaningful reading at more than 130 words per minute, a level shown to correlate with overall reading proficiency among fourth graders.

Fluency Targets for Each QuickReads Level

Reading for meaning requires interesting content, and the QuickReads program features non-fiction standards-based content in science and social studies (the QReads adaptation for older students adds arts/culture and literature/language). In addition to providing a comprehensive program of useful background knowledge, the non-fiction content in QuickReads enhances the program’s reading objectives. The unfamiliar words in QuickReads are the content words that are central to the meaning of the texts. These words are repeated several times, just as they would be in similar texts at the middle- and high-school levels.

Summary of the TExT Model as Used in QuickReads

The TExT model as used in QuickReads fosters the development of oral reading skills through the independent practice of reading short, 1-minute informational text in print or on the computer, featuring:

The TExT topic page contains much more information about the TExT model, including numerous research papers and publications about the following: