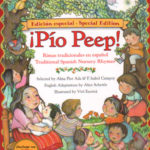 When the book was first published in 2003, it did not include a CD. In the 2006 version, Pío Peep! includes a CD with eight nursery rhymes from the book. The nursery rhymes, both in English and Spanish, are sung with music like songs. 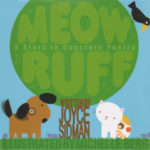 Joyce Sidman is the author of many books of poetry for children. In Meow Ruff: A Story in Concrete Poetry, a cat is lost and meets a neighborhood dog on the loose. They are caught in a rain storm and the result is a story of friendship. The book is similar to a play in that different characters have different thoughts and lines that add to the entire story. Because of this, the book can be read as a single poem or the reader can follow one character, such as the crow or the clouds. Either way, this is a fabulous book. Concrete poetry allows the writer to play with shapes and placement of the words, and Sidman makes use of every possible surface to tell the story. I can see this book being an example that leads into a language arts or art project. This is a great book that shows poetry in a different format. 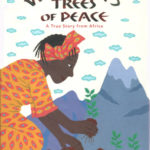 Wangari Maathai grew up in the rich green land of Kenya. However, in the years she studied in the United States, the rich green land she grew up in was on the verge of becoming a desert. Without trees, the land had dried up and was no longer able to support the people who depended on the food grown in the soil. Wangari’s simple plan was to replant some of the native trees that had been removed. Over time, Wangari convinced other women to plant trees. Word spread, and after a few decades, the land that once was barren became fertile again. For her initiative and contribution to world peace, Wangari was awarded the Nobel Peace Price in 2004. 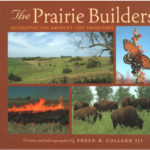 Written and photographed by Sneed B. Collard III

A prairie is habitat where animals that depend on grass and wild grass live. As the American settlers moved west, most of the prairie land was turned into farmland. By the 1980’s Iowa had less than one tenth of one percent of its original prairie left. One Congressman and a team of scientists began the journey to rebuild Iowa’s prairie. This book is about the progress of the reintroduction of native plants and animals. The book raises an interesting question at the end: Is it really a prairie if it looks and acts like a prairie? That is to say, can an entire ecosystem be replaced if not all of its components are understood or known? 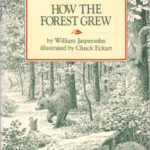 How The Forest Grew

This is one of those books that can be described as quiet beauty. Originally published in 1980, How the Forest Grew is not flashy or even colorful but it is a true gem. The book traces the slow restoration of a plowed field back into a hardwood forest in Massachusetts. First the plowed field used for farming is overgrown with weeds and is considered a meadow. Next, fast-growing sun-loving trees take over and the meadow turns into a forest. Next, slower-growing and shade-loving trees start to take over the forest floor. At each stage of transformation, the author describes the animals and plants that inhabit the new habitat. The simplistic text mirrors the quiet and fluid changes the habitat undergoes. 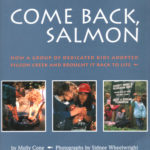 Once they cleaned the creek, the students began to raise 1000 salmon eggs in a large aquarium. The entire school took charge of making sure the salmon survived. When the salmon were large enough, they were released into Pigeon Creek. No one knew for sure whether the salmon would return. But everyone continued to keep the creek clean, and when it came time for salmon to spawn, they monitored the creek for signs. Finally in 1988, two years after the first salmon were released, twenty-three salmon were spotted in the once-polluted Pigeon Creek. The salmon came back. 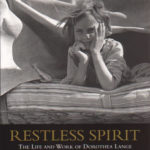 Restless Spirit: The Life and Work of Dorothea Lange is one part history book and one part biography. Written by Elizabeth Partridge, daughter of Lange’s first assistant, this book is full of Lange’s own personal pictures as well as those pictures she is most famous for. Just as Lange used her photographs to tell the history of people she sees, Partridge uses Lange’s photographs to tell the history of Lange’s personal and professional life. However, to give context to Lange and her work, Partridge uses historical events to help tell the story.

This book gives the readers a fascinating look into the Lange and her photographs. Just as some of her photographs stirred controversy, so did Lange with her life. Most women of her time did not marry a man 20 years their senior, and Lange constantly battled with the constraints of her duties as a mother and a wife. Oftentimes she left her children in the care of other families or at a boarding school so that she might have the time and freedom to travel and take photographs. Lange never shied away from making difficult decision to help further her work. 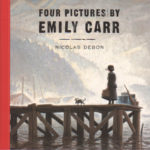 Written and illustrated by Nicolas Debon

Emily Carr was a Canadian artist and writer. Everything she did or wanted to do was in conflict with the world she lived in. Carr was an artist when there were very few female artists in the world. She enjoyed painting the native people of Vancouver Island when there was still great prejudice against them. Later in life Carr stopped painting because she wasn’t accepted and was heavily criticized for her artwork. It was many years later, when she met the Group of Seven, that she resumed painting.

This book is in a graphic novel format, and beautifully complements Carr’s artwork and life. The purpose of this book is not to tell Carr’s entire life story, but rather to give the background story to four of her works of art. The book begins with Ada and Louisa Outside Cedar Canim’s House, Ucluelet and ends with Scorched as Timber, Beloved of the Sky. 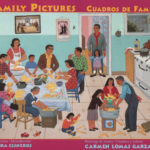 Family Pictures Cuadros De Familia is the first book of three that tells the life story of the author and illustrator Carmen Lomas Garza. Written in both English and Spanish, this book will feel like looking at Garza’s family photo album. Each picture is an intimate look at her life when she lived in her hometown of Kingsville, Texas. From ordinary everyday events such as stargazing on the roof with her sister or a day at a fair, the book takes the reader along with Garza and her family.

Books like Family Pictures Cuadros De Familia serve two purposes. One is to capture an important and influential artist’s life story. The other is to serve as a historical record of what life was/is like in the border towns. Every picture in this book is a picture of family, community, and culture. This is a book that shows the author’s roots and also how far she’s come. This books says ‘This is where I came from and with this book as proof, look at where I am now.’ Family Pictures Cuadros De Familia is truly an inspirational book. 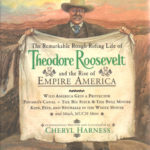 Written and Illustrated by Cheryl Harness

Theodore Roosevelt was man of big ideas and big actions. During his time as a president, he fought the powerful Captains of Industry when they wanted to form larger monopolies. Teddy was also the first president to invite an African-American, Booker T. Washington, to dine at the White House when the nation was still divided by racism.

In Harness’s book, the book begins with with the birth of Teddy Roosevelt, and ends with his death. It’s a bit of a rough start as Harness awkwardly tries to include every detail of Teddy’s life in a casual tone of voice. But the book picks up towards the middle and becomes an engrossing read. This book would be a good alternative to a textbook detailing the life and times of Teddy Roosevelt, as it is chock full of national and world events as well as quotes from Teddy Roosevelt’s letters, books, and diaries. The illustrations and sidebars and the timeline at the bottom of the page are also interesting and add even more background to the story.